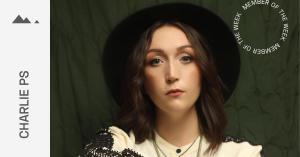 Vancouver-based Charlie PS has a sound that could be described as a sonic melting pot. Although she grew up surrounded by ‘90s British pop culture, her sonic inspirations stem from a mix of the R&B divas of the ‘70s and ‘80s and the rock and blues legends of the 20th century ranging from Kiki Dee to Stevie Nicks, borrowing elements of strong vocals and energetic riffs and using them to create her own modern sound.

Her new single “Ghost of You” (May 2021) combines flavors of alternative and southern rock, creating a backdrop for ‘’western-esque’ storytelling. “‘Ghost of You” is a step in a new direction for me,” explains Charlie. “My sound has been rooted in mainstream ‘pop/rock’ but has naturally evolved to become more “alternative/rock”, seasoned with a southern twist of rustic toned guitars.”

Charlie’s debut EP, Little Miss Dysfunctional (2018) speaks an undisclosed story of disingenuous relationships that are interpreted differently by each listener and her effervescent style resurrects the dying niche that is females in rock music. The EP’s single, “Little Miss Dysfunctional” went on to be nominated and win ‘Best Pop Song’ and was also nominated for ‘Best Music Video’, while Charlie herself was nominated as ‘Artist of the Year’ at the Kootenay Music Awards (2019). She also placed in the Top-100 in CBC’s Searchlight competition and won a spot at the local Surrey Fusion Festival (2019).

Upon winning the title of ‘Kootenays Best Singer’ (2013), Charlie made her way through the venues and festivals that her small hometown of Nelson, BC had to offer and after graduating from Selkirk College’s ‘Contemporary Music Program’ (2014) she relocated to Vancouver, BC.

Amplify BC Fund Renewal 2021: We need your help!

A letter from the Executive Director, Music BC Industry Association Dear music industry colleagues, As many of [...]

Teon Gibbs & preme crafted this lyric mashup for the one and only Shay Mitchell!

Music BC Member Teon Gibbs & preme crafted this lyric mashup for the one and only Shay [...]

Music Canada has partnered with Abacus Data to get a renewed understanding of how artists’ perspectives continue [...]

We are so excited to team up with @advancemusicca